What is a wind rating and why should you care? 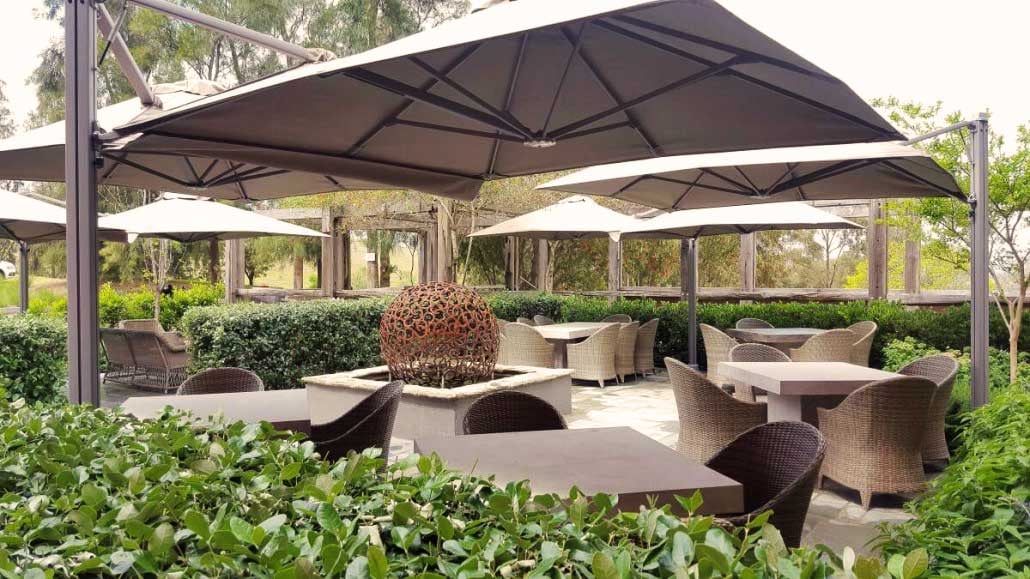 Whether in the hospitality industry or the outdoor area of your home, there are few things more chaotic than the scene of a patio on a windy day. Just picture it: With one powerful gust, an umbrella could take flight, taking tables, cutlery and potentially people with it. Trying to wrangle outdoor umbrellas down before this scene becomes a reality isn't always an easy task.

So, when you’re looking for an outdoor umbrella, an important feature is wind resistance. An umbrella that can't stand up to the elements can hurt your business several ways, or be an inconvenience to you at home.

It's no wonder then, that many manufacturers are very eager to show off their 'wind ratings' with some even claiming that their umbrellas have been engineered to withstand winds up to 140kph (85mph). As many disappointed umbrella owners who trusted those ratings found out, wind ratings are not what they’re purported to be.

The issue with wind ratings

The problem with wind ratings is that they're either created using software, or at best conducted in perfectly controlled environments (wind tunnels) where wind builds up slow and steady and flows at a continual rate. In real outdoor conditions, however, wind is much more unpredictable and violent. It often blows and gusts with sudden changes of direction. Its behaviour is also influenced by surrounding trees, buildings or other objects, and depending upon the angle of the outdoor umbrella to the wind, the wind resistance of the umbrella can change entirely.

Another problem with wind tunnels or engineered ratings is that they won't test the impact that wind has on the umbrella over time. Even when the umbrella remains intact after being exposed to strong winds for a short period of time, its structure may have been damaged or weakened, and may not last as long later in its useful life. This is why common sense has to prevail and in general, umbrellas should be lowered in stormy conditions to gain the best useful life out of your investment.

Such limitations of wind ratings are very well known in engineering circles. Unfortunately, it's something that many manufacturers don’t mention to customers. Sadly, this marketing gimmick normally becomes clear in the fine print, where you often find out that the warranty won’t include any damage resulting from wind.

Why Shadowspec is different

Shadowspec outdoor umbrellas have been tested in real-world conditions in different locations around our factory and the surrounding area: decking areas, local coastline, downtown among buildings, and in residential situations. The wind rating we show is always a conservative average of these performances, which we measure using anemometers and portable weather stations.

Overall, the standard wind resistance of our umbrella range exceeds Beaufort 5, which is normally regarded as in the range of 33-41kph (21-25 mph). Beaufort is a metric that measures wind speed in observed conditions not in a specific controlled wind speed. Beaufort 5 is the ideal level of resistance required for outdoor umbrellas which are, even in their most heavy duty form, a temporary shade solution to be used with discretion and common sense. To give you an idea of what Beaufort 5 safeguards against, if the wind exceeds the 35kph mark (20-22mph), it will blow over a full wine glass, tear a newspaper from your hand, or blow the pages of a book to make it unreadable.

In such conditions, it would be too uncomfortable to remain outside, so you wouldn't use an outdoor umbrella anyway. All you would want to do is close it, cover it quickly and go back inside. With our patented open/close mechanism on the SU6 and SU7 Cantilever Umbrellas, closing the umbrella takes no more than 3-5 seconds, and the whole operation including cover the umbrella takes no more than 1-2 minutes in total. Once that’s done, our umbrellas will cope with whatever winds are thrown at them (within reason).

Are shade sails and awnings better with strong winds?

Sails and awnings have their advantages, but also serious drawbacks. Shade sails are permanent structures that require poles, concreting, and peripheral works for bare minimum safe installation. Also, you find that in the main, they're also not warranted if damaged by wind, but by comparison you cannot easily take them down to prepare for a storm. Also, they tend to flap around very unnervingly even in light wind, also creating noise which can annoy people during the day, or at night wake people who sleep nearby.

With awnings and other shading solutions that have a part fixed to the house or building, wind load on the shade system can actually transfer to your home or property, stressing its structure. Also, with strong winds, their creaking and groaning can be heard indoors too. In worst cases, if they are damaged by a windstorm, your wall or exterior cladding where they connect the structure (and potentially any nearby windows) can also be damaged.

Umbrellas overcome all these downsides: they offer a trouble-free experience, as they're up when you’re using them, and down and covered when you’re not; in addition they're a freestanding solution with simple mounting/fixing options, and so they don’t usually mount to your home or premises.

Wind ratings are an important feature of outdoor umbrellas. But when you're considering them for your next purchase, make sure you understand how the tests were done. Read the fine print and ask specific questions to the manufacturer. You may want to walk away from cheaper models that only have engineered calculations, or performed really well in wind tunnels but have never fully been testing in real outdoor conditions.